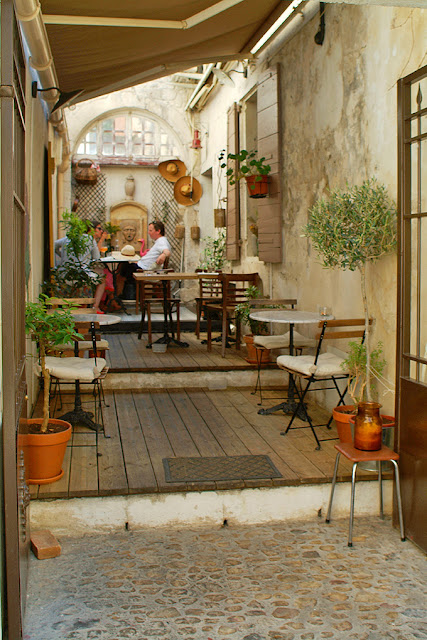 So my most memorable meal in Arles...in...I can't even tell you how long...was at a bar.

Now, before you roll your eyes at my obvious hi-lo, let me explain.

Last Saturday, I was finally able to make it back to Chardon. A friend had invited me for dinner there at the beginning of March and I was so impressed. The ambiance had been chalheureuse on that end of winter night, the service impeccable (a stickler with me, as with any former waiter), the food clean and bright. But it had been an evening of art openings and the bubbly had been copiously poured, softening my memory around the edges. I needed to return, alone and focused. As fortune would have it, when I arrived - slightly puffy from the noon-day heat and a tad late for my reservation - I was hand-shakingly hungry.

Sarah, the sprite Arlèsienne manager, treated me as if we had known each other for a long time (and indeed, we have been following each other on instagram, oh, these modern times) and upon my pausing over a table in the dining room next to a couple lost in loving gazes, wisely suggested that I take a seat at the bar in the kitchen. Sometimes shy me even more wisely accepted for what followed was exceptionally delicious but also just really...fun.

I want to hit pause for a moment, though, and tell you why I was a fan of Chardon from day one. Laura Vidal and Harry Cummins (sommelier and chef respectively, both previously of Frenchie in Paris), along with Julia Mitton (former general director of Experimental Group - aka Cocktail Heaven) formed the Paris Popup a few years back. The idea was to be able to use their knowledge without being tied down to a particular restaurant, allowing them to continue to grow their crafts and have a healthy exchange with their hosts. After Paris, adventures awaited in such far-flung locales as Kyoto, Barcelona, Fez and...Arles. Eh oui, Arles can be charming, non? Bitten by the bug, they decided to give back the opportunity for other burgeoning chefs-in-residence and Chardon was born.

And this means that the Australian couple of Mal Meiers and Kate Christensen from Food & Wine Pop Up are cooking and wining (no, not whining, although I have to say that there was some pretty fantastic banter taking place) in-house until the end of June. While they are young and yes, lovely, their level of talent is off the charts and between them they already have nearly thirty years of experience in the industry. Does this mean that their exuberance has been stifled? Au contraire.

When I settled onto my stool at the bar, service was in full swing - a ballet of chops, sizzles and a bell ting when the plates were ready to be sent on their way. I asked Sarah what I needed to eat, she decided and suggested a round yet minerally glass of red from the Tenerife that I would have never chosen on my own. After that first wave of activity began to subside, Mal and I fell into an easy conversation, all while his focus never wavered, his hands never paused.

For his cooking is deceptive. It was fascinating to discover. It looks incredibly simple and yet every element of every ingredient has either a back-story or several steps of preparation. And you would never know anything beyond just that what you are eating is so fantastic that, as I told Mal, "It makes you want to eat as slowly as possible." And while my first dish, a mussels tempura battered in Indian spices served with a citron confit mayonnaise was so happy inducing that I forgot that I was in France and ate it with my fingers, it was the second that truly showed the complexity of the ideas at hand.

Even though I have lived in Provence for over ten years, I have eaten local taureau or bull, maybe only twice. It is a tough meat to conquer well. But here, after being cured with native Australian pepperberry, it is a tartare with the softness of tuna (no easy feat) and a depth of flavor that I am still wondering about, especially as it was paired with a forest floor of mushrooms, twisted puffs of Camargue rice, a mixture of fermented grains with dots of smoked mayonnaise. Mal very generously explained what had gone into this and the other dishes I saw being created in front of my eyes with nearly all local ingredients, which made being there all the richer an experience.

He said that he feels that is getting to the point where he is arriving with greater frequency and assurance at really delivering the ideas that are in his head to what is actually presented, then tasted on the plate (it is worth noting that that he is an adept ceramicist as well and the plates used are his own, which provides for a pretty complete aesthetic if you ask me). That is an idea that I struggle with as well in all of my creative efforts but to hear that from him was moving and is really indicative of cooking that isn't just a visual impulse as things can tend to be amidst Chef's Table obsessed foodies. I was only able to speak with Kate for a bit as things slowed down, but it is really clear that this couple is batting for authenticity and discovery, two words that mean quite a lot to me.

So, will you go, please? Trust me when I admit that my photos (taken on the fly during lunch!) do not do this justice. Kate and Mal are there until June 26th. And if you can't make it, then by all means go to meet the home team or the next chefs-in-residence. During my lunch I kept mumbling, mostly to myself, that, "I can't believe that I am having this level of food in Arles." Let alone in such a relaxed but professional environment. Listen, as I have said before, a lot of the food in Arles is either surprisingly bad or pretentious or both. At Chardon, you can have fresh, delicious and adventurous. And that is thanks to the trio behind it. In a town where you can't say that you are "from" Arles unless your family has been there since five generations, they have (and are continuing to do as new projects are on the horizon) simply not listened and with great exuberance have ushered in the new. Clearly, sometimes Michelin-esque stars are soaring rather than resting in a fixed orbit. 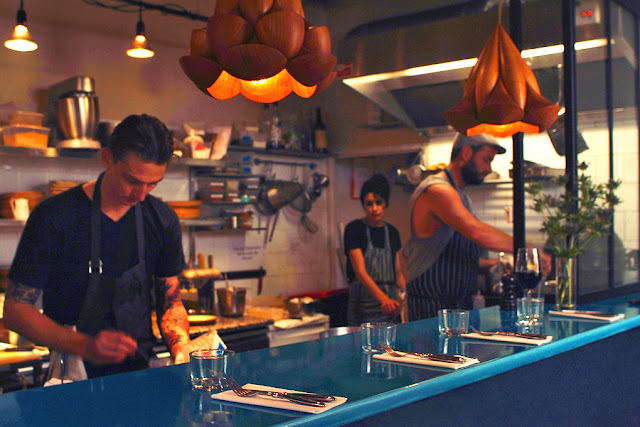 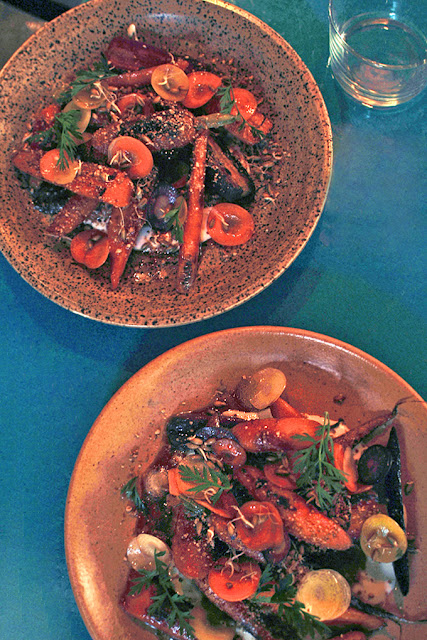 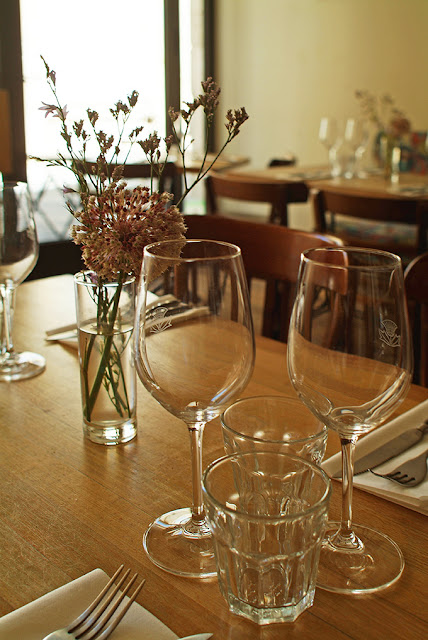 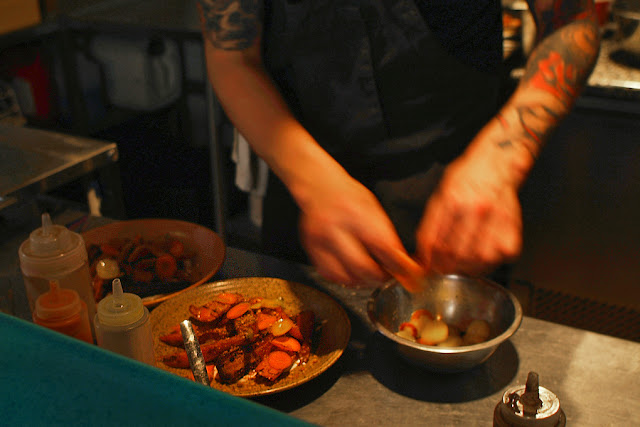 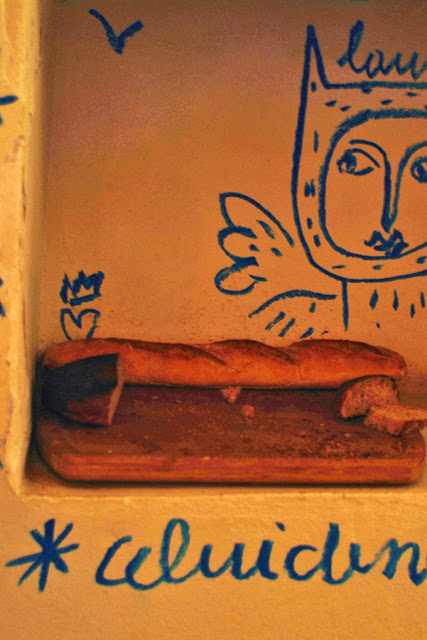 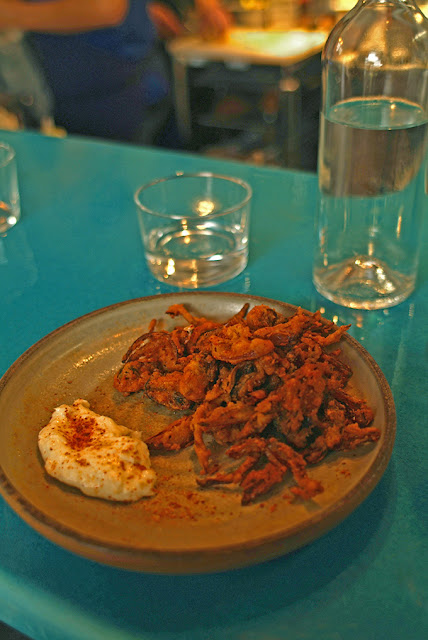 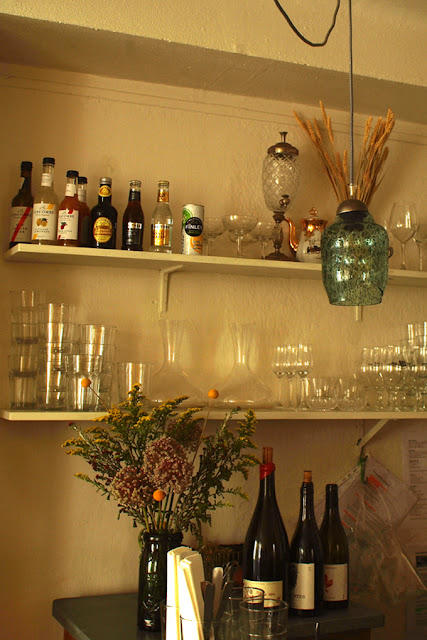 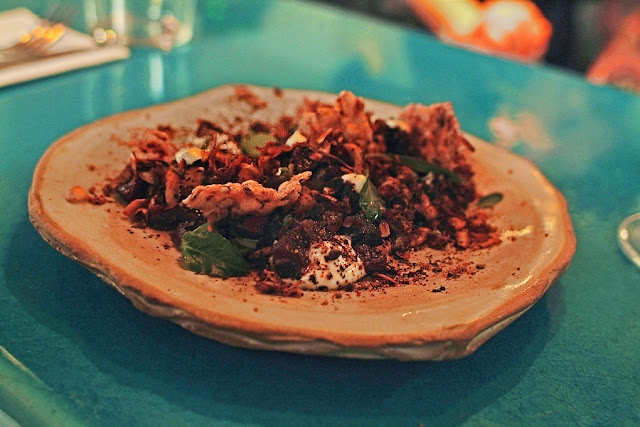 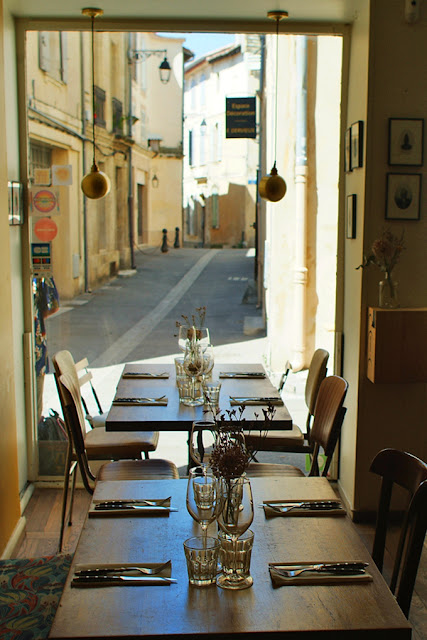 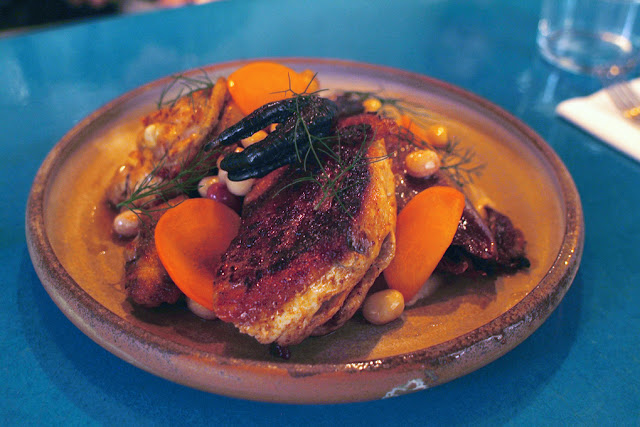 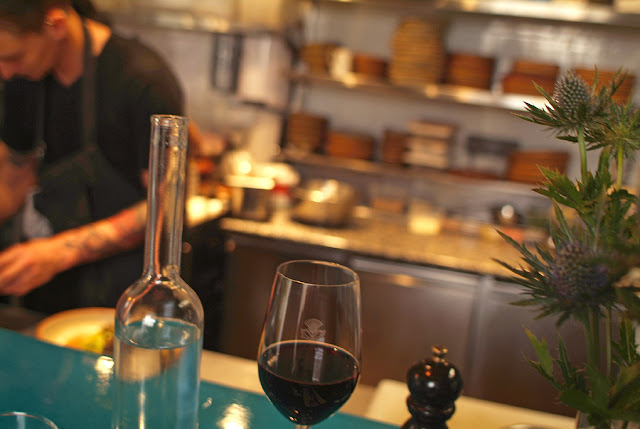 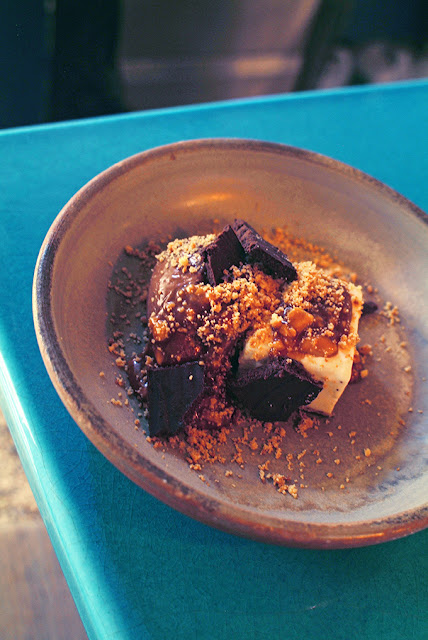 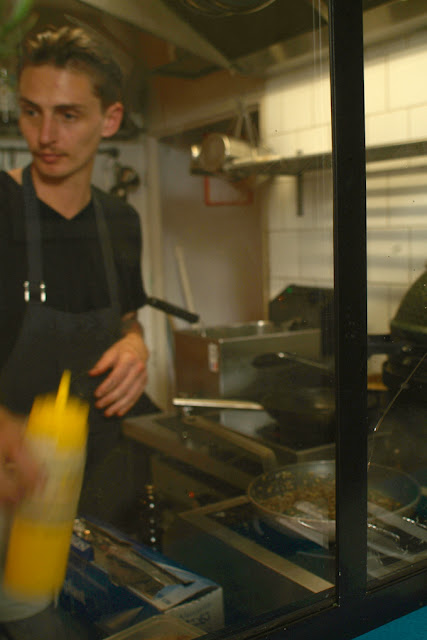 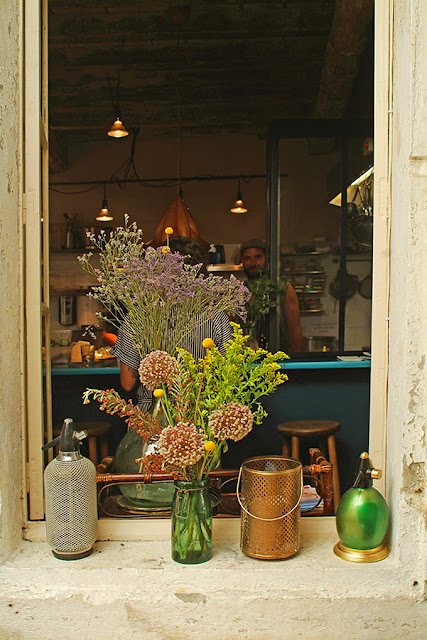 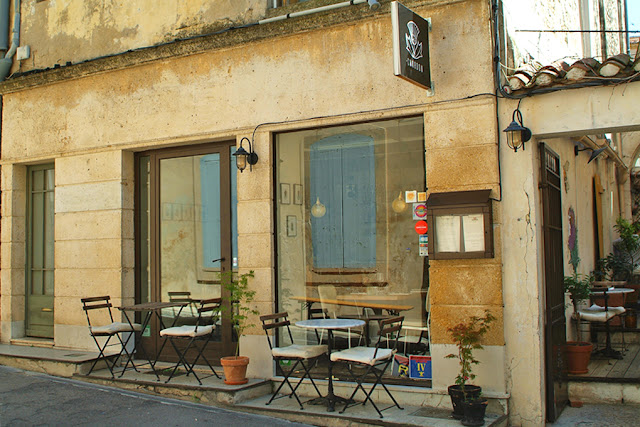 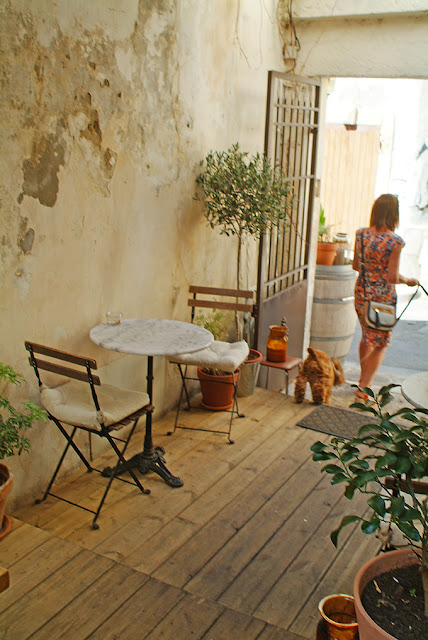 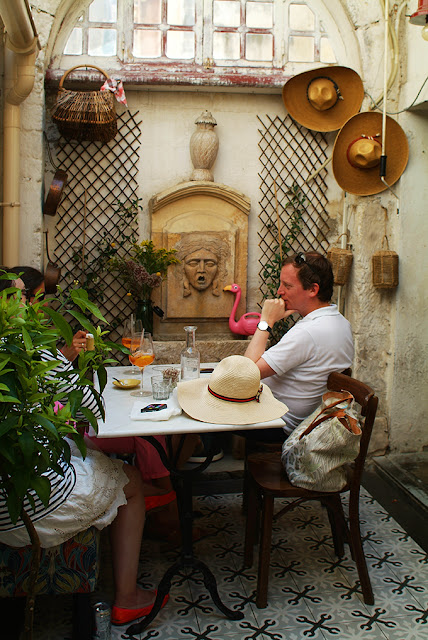 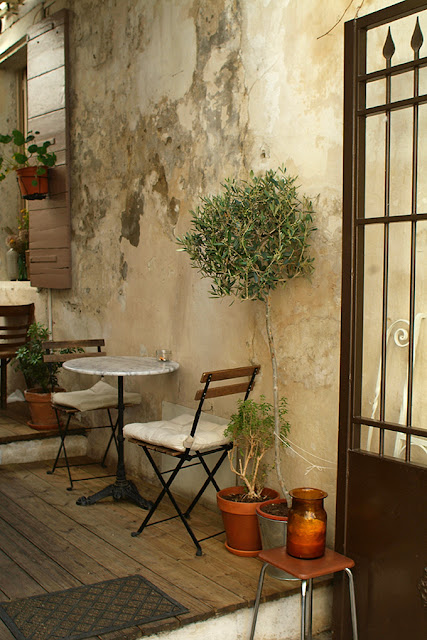 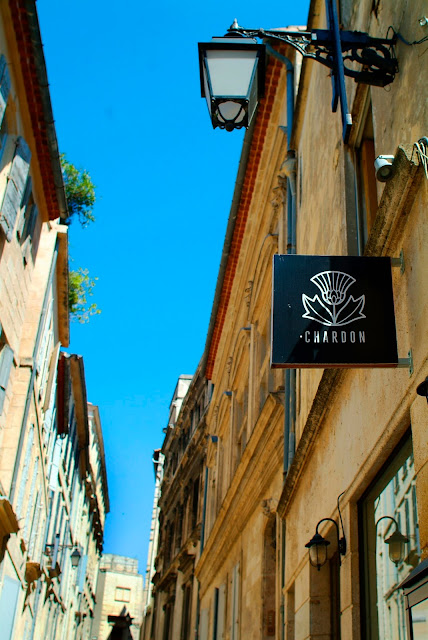 ****
As always, this post is just me spreading along the word of something that I feel is really, really, really worth knowing about. In no way was it sponsored. On est d'accord? Just to let you know.
Thank you for being here,
Heather