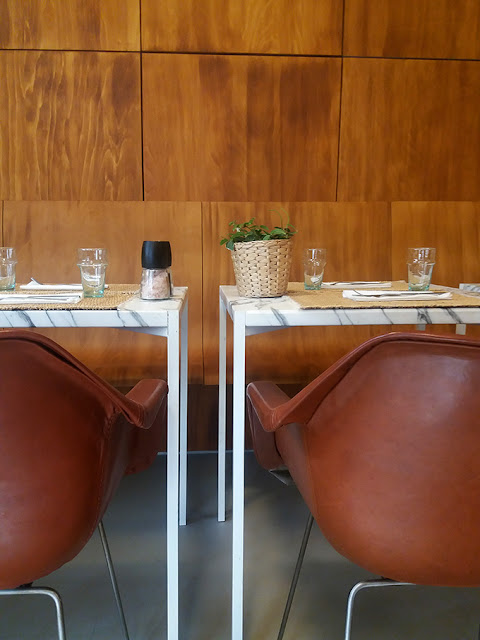 It started to rain.

At first I tried to ignore the drops that splotched onto my open book like so many childish tears but then I did the natural thing, grabbed my wine glass, stood up and hugged to the wall. No one had seen the storm coming, least of all me, who had gone to Le Violette, my favorite restaurant in Avignon, for the comfort of their hospitality and a taste of my go-to salad, les Dames de Shanghai.

Busboys ran to bring out the massive umbrellas that usually protect this beautiful courtyard from a beating sun. One of the owners - I like her; she is a no-nonsense blond - waved for me to go to find a table inside instead. I had too much of my meal in front of me to be blown about needlessly.

There were several of us milling about, table hunting through muffled laughter at the surprise of it all. The unexpectedness. Having been a waiter, I knew not to take a table for four but felt shy about sliding into the only "two-top" left as it was next to one already occupied by a gentleman looking at his menu. I slid onto the banquette with a nod.

Because of the sheer proximity, the details of him popped into focus, one by one. White hair in curls on the top of his head, glasses perched, yet tattoos peeking out from his shirtsleeve, watch hanging loose at his wrist.

My salad arrived - I am so addicted to it - and as I snapped open the chopsticks he wished me "Bon Appetite" with a slight smile. His cell phone made a ridiculous beep that made me laugh and remark how much we rely on those little machines. A few minutes later, I also offered a "Bon Appetite" to the trio of ladies to my left and then offered him a "I copied you," with a smirk. "I see that," he responded. And that was it; the floodgates of the conversation opened and began to flow.

We talked about everything and easily - including the moving art that was being featured in the Collection Lambert, where Le Violette is perched. He had driven down from his home in Curçuron, in the Luberon, to see it. I appreciated that. After tasting his caramelized travers de porc, he asked me if I wanted to try it. And I really did, it looked fantastic, but refused out of politeness sake as that is something that is simply not done in France, not between strangers, even if we didn't feel like ones. Somehow neither of us took for granted the facility of our exchange but accepted it rather hungrily.

Of course, he wanted to drill me about the state of American politics, everyone does, and shared certain perspectives that made me think that he was of the generation of the soixante-huitards  - from 1968 - when the youth uprising shook Paris. Despite having known success, like many from that generation, he had chosen a less obvious path and then a quieter life had chosen him. He was forced into an early retirement from his company...and then, quite recently, his wife had died from cancer. It was hard for him to say those words aloud and yet he did with dignity. How obvious it was that he loved her so dearly, how she was with him, with us, at the table.

In having told my story - and I tell it patly now, "16 years in France traveling the world as a...then he...now I..." - he had understood why I was here, also dining alone, knowing no one in a new town. Although I had already taken a second glass of wine to stretch out the lunch, I did not want dessert, even though I had ordered him to get the cheesecake, mandatory. So a decision had to be made.

Maybe I am wrong, but I think that not that long ago, perhaps I would have tried to...push something into being, grasping. But there had been no flirting, the difference in our ages and our respective tenderhearted conditions denying that opportunity. That wasn't this experience. I asked for my check and still we were laughing and sharing non-stop. With an inhale I announced, "Well, I am going to go..." and stood up.

"Comment vous appelez-vous?"
"Michel," he answered and extended his hand, I took it to shake but held it.
"Je m'appelle Heather...It seems like we are both at a time of rebuilding our lives, aren't we?"
"We are, c'est vrai."
"I wish you well as you continue forward."
"And I to you."
Both of our eyes were shining, locked with gratitude, pure. I released his hand and smiled again while turning to go.
"Au revoir."
"Au revoir." 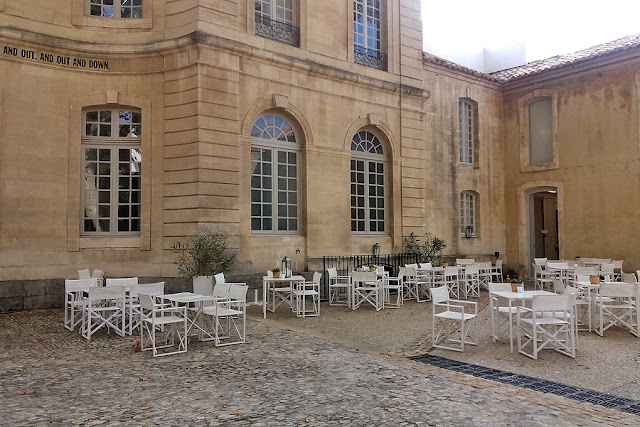 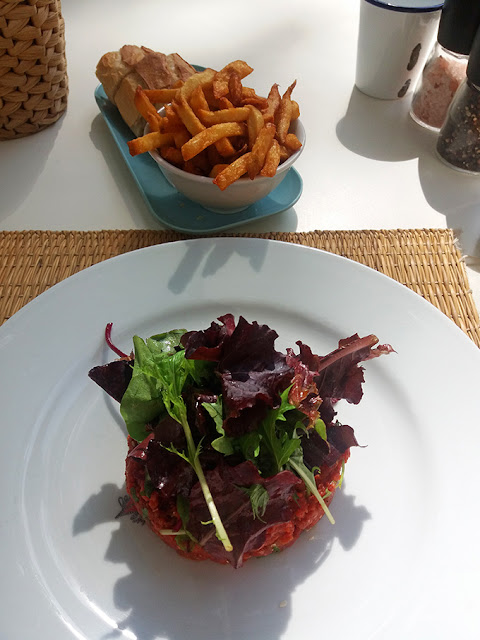 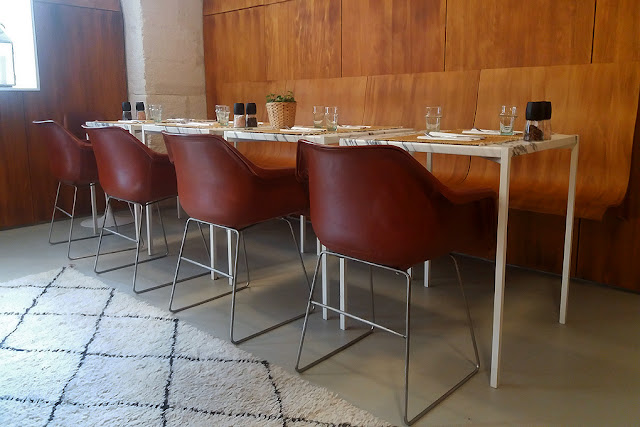 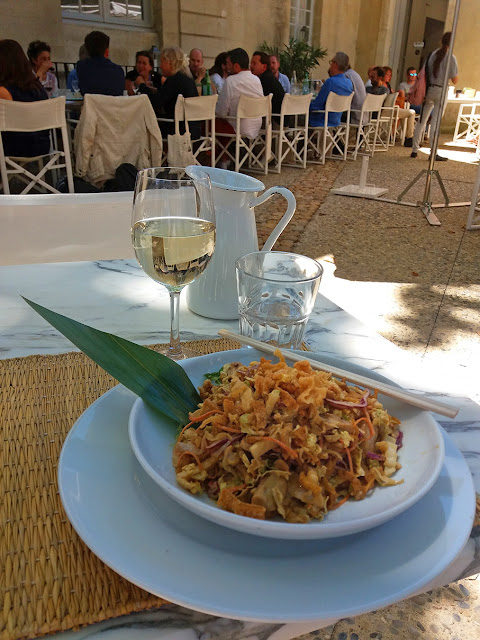 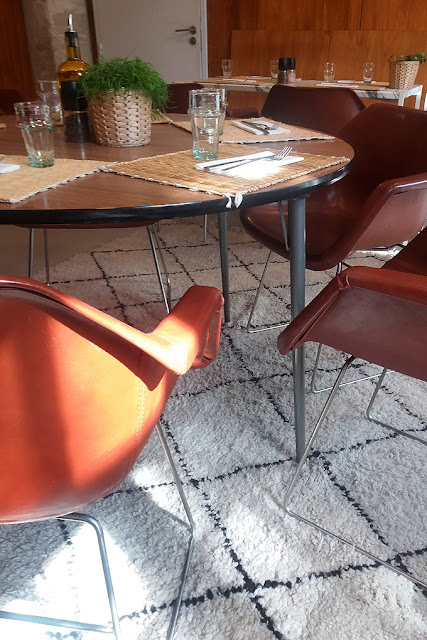 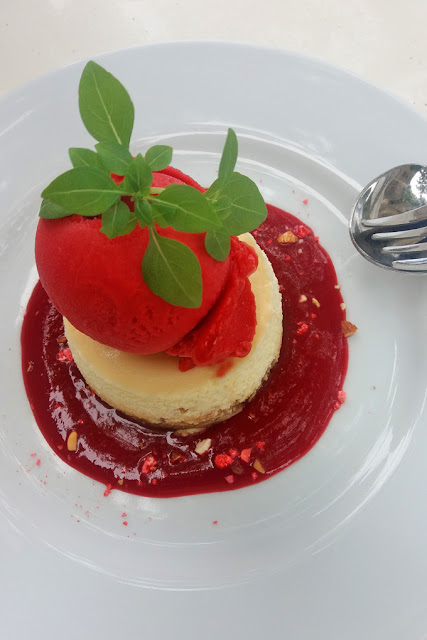 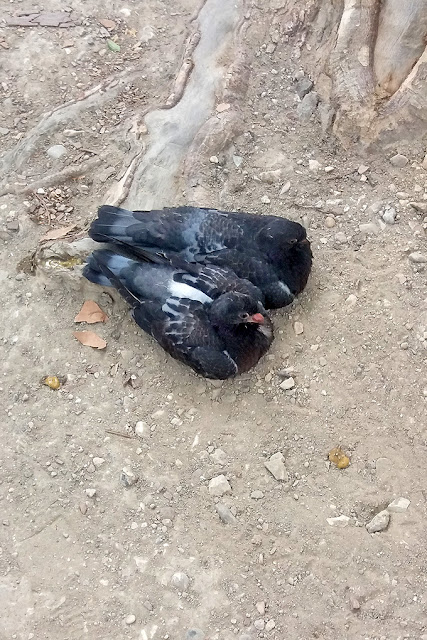 *PS. I have had this post in my head for two weeks now, but waited to go back to take some photos to illustrate it and the wonderfulness that is Le Violette. I told the manager/owner about my intentions to write about my experience. She remembered the day well and said that Michel had spoken to her about our meeting after I had left and what it had meant him.

I will keep repeating it, but there is so much beauty available to us. All the time...

Coming up for air 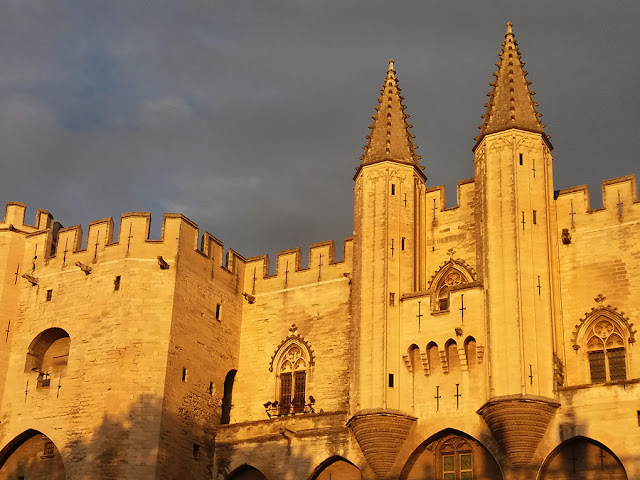 Well, the fact that I am starting to get search dog emails tells me that it is time to check in with this amazing community to explain the reason for my silence. And for those of you who reached out, please know that I am deeply, deeply moved by such gestures, especially in this time of transition. One where, admittedly, I have been wrestling with the chimera of loneliness quite a lot.

I am in Avignon, la Cité des Pâpes, currently working a two-month contract that will continue through October. Such temporary contracts, or CDDs, are very common in France. They give the employer a means of "trying out" someone before committing to the far more binding permanent contract, the elusive CDI (which one needs in order to, say, buy a car on credit or rent an apartment). What this means for me is that I am on an island of seeming-security in the midst of a strong current. And it has been interesting to observe the ugly head of perfectionism rearing its head as a result. I have been pushing myself hard to advance - for there is much to learn - and judging myself harshly when I "fail." All of these modes of being are ones that I thought that I had left behind long ago, but they are apparently very old stories that still need to be brought to light. Hopefully, with kindness. 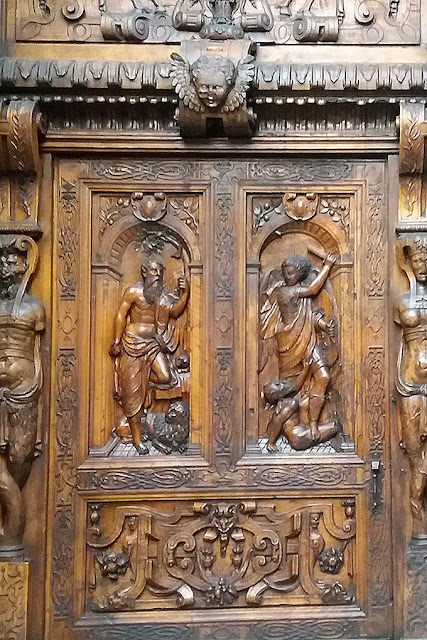 There have been some gifts along the way, the most important of which is that my friend Anthony's Mom is renting me a beautiful studio (see above to understand how perfect this is) that I will be able to stay in if my contract is extended. My ex has been kind enough to let me store some of my possessions in the old house and helped me to move a few carefully chosen items to Avignon last week. That was a hard day. While I had long since made my peace with the end of our 15-year relationship and had disconnected from that beautiful home, saying au revoir to Kipling, whom I will no longer be seeing on a regular basis, was brutal. I am crying to think on it, and how much I miss him, so I will move on...

The idea all along was for me to purposefully not try to launch into a third career yet (nor have I, realistically, regained the self-confidence to start my own business but am getting there) but rather to get what my Sister and I used to call "a job-job" back in our acting days that would support me while I could continue to be creative, which is where my heart is and has always been. However, the reality is that I am too exhausted from working such long hours and so have not been able to keep that part of my spirit as active as I would like, save for the occasional short bursts on Instagram (@lostinarles). In time, my wish is that I will build up strength so that I can put down the words and take the photographs on a more regular basis. Or I will have to find another solution. I woke up this morning with a very clear thought in my head: "my life cannot be only this." In France, they call it "métro, boulot, dodo" or "commute, work, sleep" (then repeat). 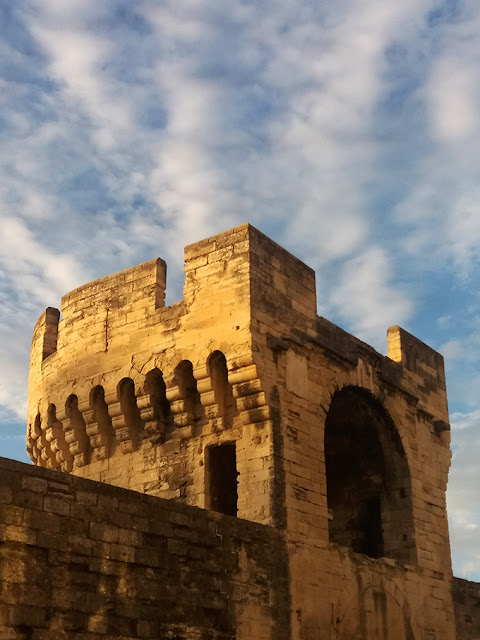 Last night was a rare evening off and I walked and walked the streets of Avignon. The light was splendid golden, that September sun fading creating long shadows as the crowds passed in silhouette. It is a city and I have again passed into anonymity, something long since forgotten after so many years of living in the Provençal village and Arles. I listened to jazz in front of the Palais des Pâpes, then wandered through the vernissage of an exhibition in the magnificent Palais de Roure, tenuously clutching my rosé in a plastic cup while watching the old families of this grand town air kiss. It was pleasant. Afterwards, I lit all the candles in my studio, put on some beautiful music and found myself staring off into space, thinking and letting the feelings come up of all that has changed, of all that is in motion.

I am still coming up for air, rising and rising. And then sometimes falling back. Not drowned or flying but still here, breathing in my bones; filled with longing but also grateful. I am not sure what is next. But none of us do. 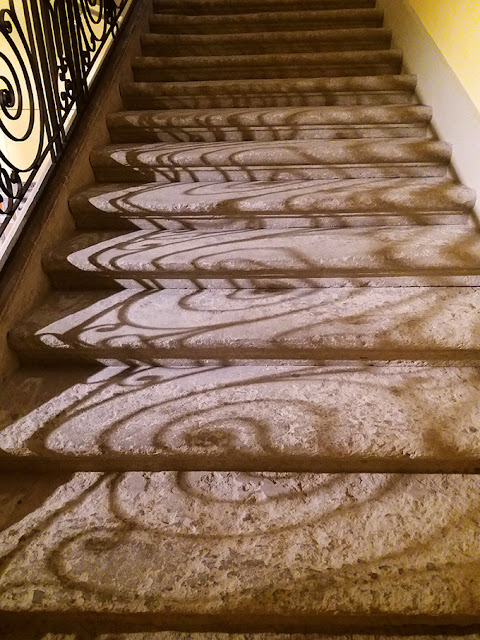 It is all we can do. With all that is going on in the world, I am hyper aware that this is just my story. But I feel how it essential it is to try and remain open to the beauty and the good.

Thank you for being here,
With love from Avignon,
Heather