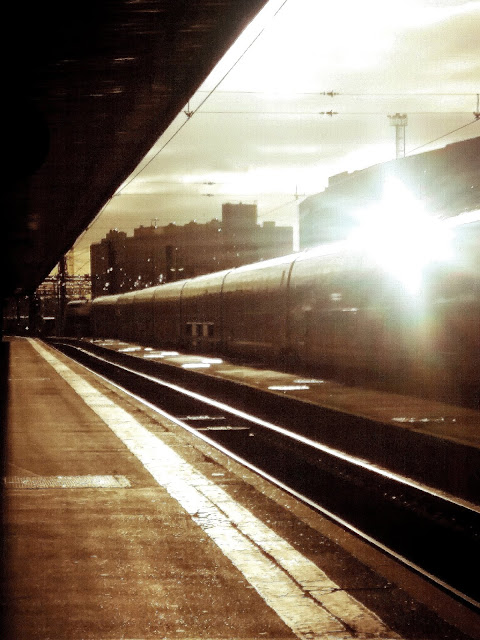 I smiled at her right before she stole my phone.
Her, the pick-pocket. Dyed blond and young. "She would be prettier," I had thought, "without such pronounced eyebrows." A la mode, those heavily-drawn features that have nothing to do with Liz Taylor, Ava Gardner. My heroines of glamour.
I had just posted on Instagram with a photo that I thought quite smart. In the subway, a poster that had originally been an ad for Chanel - oh, that iconic bottle - but with many layers of other advertisements scratched and torn above or below it. Nothing is simple in our modern times. How tired I felt, but I had seen something interesting and that always does me good. And besides, I was in the City of Light. With a twinge of worry I thought of Christophe, whom I was going to meet. This is our dance, l'Express Avignon-Paris, le Paris-Avignon. He lives here, I live there. I dug into my bag and grabbed for the lipstick that I had thrown in at the last minute, a little too pink. But I dabbed it on in my blurry reflection of the métro window with a steady hand but clucking inwardly at the shadows drooping beneath my eyes ("Will he see them?" I wondered. He did, it's clear, but gentleman that he is said nothing.) As I rubbed my lips together with a pop, I felt someone slide into the seat next to me. Me, puffy and overheated in too much clothing (Hello, beginning of menopause), my roll-on awkward between my knees, my tote lop-sided on top of it, I took up too much space.
I smiled at this young gamine apologetically and shifted to make room as tourists do, trying to make myself smaller. It is then that I am sure, or just after, that her hand reached into my sagging coat pocket. And from there she stole my phone, leaving at the next stop. I had thought it odd that with a slight lift of her chin and nothing more her gaggle of friends had followed, silently. Some thirty seconds later, perhaps a minute at most, instinct kicked in and I reached for what was no longer there.
It's funny that dance that we do when we lose something. We keep searching the same space as if the object will magically reappear or look to places that it could not possibly be, "just in case." But I knew. So I dragged myself and belongings off the train at the next stop, sweating profusely, to ask at the ticket booth what I should do. "You could go to the commissariat, but..." she smiled wanly and shrugged. "Ca arrive tellement, tellement souvent...tous les temps." And she is right, I had heard the announcement in several languages repeatedly over the speakers, "Attention, there might be pick-pockets onboard."
The photos. With a wave of nausea, I realised that all of the photos of Christophe and I together, of Rome, of his recent surprise of an overnight stay in the Vaucluse...but mainly of us, laughing...were on the phone that I had foolishly not backed up onto the computer. Gone. I count on my photos to boost my memory problems and look at them when I am having trouble to soothe me. As I approached his apartment, the weight of that loss grew, as did the simple fact that the phone had been a gift of his part, given lightly despite the financial value, which had made the gesture all the more touching to me.
Admittedly, I arrived on his doorstep with over-the-top drama. (Hello, beginning of menopause, part deux) "I have some bad news." I watched his smile of welcome melt and the corners of his mouth turn down. I ignored Noumea, his bijoux of a dog, who was jumping excitedly around me, tail wagging ferociously. "Your phone was stolen, I was pick-pocketed. I am so sorry." "No, your phone was stolen," he replied calmly. "Ok, well, sit down and we'll call who we need to call to get things sorted out."

It's interesting with Chris. When he is upset with me, which isn't too often, thankfully, he will rarely say anything right away and never with anger. So when, nearly an hour later, he quietly exhaled, "I thought that something terrible had happened...that someone had died," I knew that I had gone too far, had created an All About Me, out of guilt, or self-derision. I apologised to have scared him so. A loss about loss.

And then began a loop de loop of paper trails and phone company pleading. Such moments are rarely simple in France, especially if you wish to keep the same phone number that you have had for years. I trotted to here and there, being told no or maybe, and was once caught in the rain, heavy ink drops on my coat, head huddled while passing couples pressed together under an awning, as if in a movie about Paris. But it was Paris. It is.

All of these efforts were tiring, so we decided to have an early apéro. The rain said goodbye; the sun came out. We found a table at Café Chéri where the bijoux dog could find space at our feet. Chris and I. Right there, the surrounding crowds forgotten. Nothing between us. Not the siren call of a texto or an Instagram count to check for likes. I couldn't have anyway, for that girl, that deceptive blond, had stolen my phone. I felt giddy all of the sudden. And truly, think about it...how often does one feel giddy these days? Internally, I was exclamatory. "The light on the trees, was it ever that bright? My goodness, look how everyone is walking with faces down, affixed to their portables. How do they not run into each other? Would they notice if they did?" The birds were chirping something that sounded suspiciously like, "Free, free, free." I looked at Christophe. He was telling me a story. I held his gaze and let a certain weight - not necessarily linked to any other - burn off with the last drift of the day gone by. Good for good, and surprisingly, happily, done. 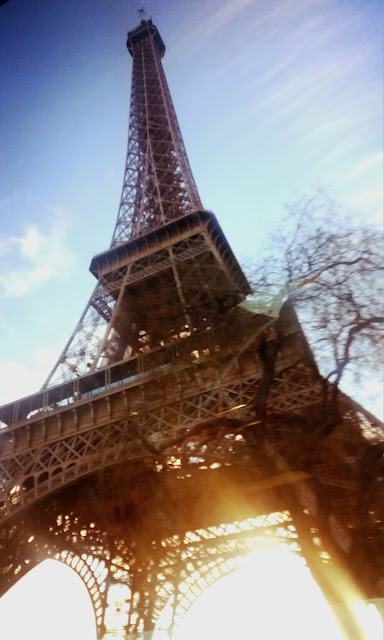 And as today is La Fête de la Musique tonight in France...a bit of something sweet and nostalgic that seems right to me for this post.


Happy Solstice...
Happy Summer (or Winter!)...
I am, as always, so very grateful that you are still here reading even as time goes by.

With Love from Provence,
And joy in my heart,
Heather