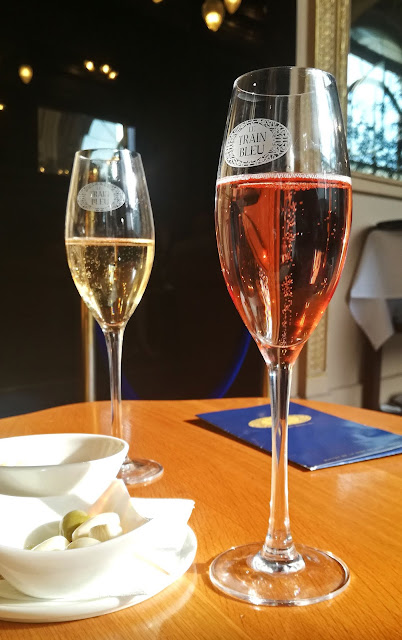 "Look up," he said. I did and found myself staring at the glass and iron beams of the Gare de Lyon's emblematic roof. "No, too much!" I swivelled back to eye level. "Ok...to the left," I exaggerated my movement, robot-style. "No...back to the right..." Stop. Zoom. "And again, up!" Ah, there Christophe was! Standing on the balcony in front of the entrance to Le Train Bleu. Waving, waving his arm in hello.

I should have known that was were he would be.

It is a special place. Perhaps for many, I would imagine, but for the moment, while I write, I am claiming it as "ours."

You see, we met at Le Train Bleu for our first date. His choice, nonchalantly offered, in order to put the voice to the face after phone calls that had lasted from midnight until morning. I took the train from Avignon. Nothing less than a Monument Historique would do. Call it a Parisian version of fore-shadowing something truly special? Save that he was...45 minutes late. It had taken all of my will - plus not one but two glasses of champagne - to believe in him enough to stay, alone, trying to look relaxed, as though I belonged there, until the traffic cleared and he arrived. When he finally did, pushing the table aside to slip next to me on the banquette in order to give me not a peck but a real kiss...well, that. Was that.

We have gone a few times since and I am used to kicking my luggage through the wooden revolving door. It's then that I truly know that I am back in Paris to be with my man. I am no longer intimidated by the chignon-tight hostesses who have perfected the "and you would be?" stare down the tip of their delicately pointed noses. But ah, it was Lucie that day at the welcome desk and she is lovely. She smiles. Or she did, until she frowned.

Apparently, there was no room at the inn. All the tables were full. Her side-kick, the redheaded bellhop (with chin-strap hat to boot) asked us to be patient, that soon a table would be available for "such regulars" as ourselves. I don't remember if Chris and I shot each other a side glance or not. Probably. I could tell that he was more on the side of leaving, we had been bantering with these two long enough...so to buy a bit more time I showed Lucie my favourite photo from our previous visits - that of an elegantly poised Nouméa (Christophe's tip-top trained pup) sitting in the midst of the empty dining room in-between services. Lucie's smile returned and she excused herself quietly.

She came back with a discreet wave. "I have negotiated a table for you in the Algerian room. It had been rented out for a private event." She seemed quietly proud to show us to our spot of two grey leather club chairs tucked in a corner underneath a potted olive tree. The meeting of Provence and the North. "Do you know what you would like?" We did. One glass of Brut for monsieur and Rosé for Madame. "I know it is cliché for the woman to have the pink champagne," I offered, half-apologising. "I would have done the same," Lucie responded while whisking away the "reserved" sign from our table. She disappeared after a simple shrug.

Have you ever seen light that is so golden that it is somehow silver? It cuts through to diamond each surface that it touches. That was our light, embracing the room. The coupes arrived, we clinked with our usual toast. We had the shadows of olive branches tattooed across our foreheads like victory wreaths. We couldn't stop laughing, delighted to rediscover each other, finally, alone.

Something that I learned as a travel writer is that when accidental magic happens, you listen to the lesson it is whispering to you, you take it seriously. And so I proposed that we stay for a second glass. When the Maître d'Hôtel arrived, Christophe agreed, but on one condition.

"The glasses were not completely clean. I would prefer that they are." He pointed to the hard water spots on the base of each glass. He is Parisian, after all. And the Maître d'Hôtel agreed. It was inexcusable, certainly at this (best left unmentioned) price per coupe. And yet all of this was expressed with lightness, even when young Rémy was brought over to the table. "This is the young man responsible for this!" After being held in something like a wrestling lug of the neck, jokingly, Rémy bent over to examine the glasses in all earnestness and apologised. Several minutes of discussion followed as the pair started to clear the room of the furniture. It was a special evening as the room was being prepared for a new set that would be installed tomorrow. "Out with the old, in with new." Our second glasses arrived and on we sipped.

The banter between the four of us continued as they diligently emptied the space. Rémy is from Marseille, which immediately invited such teasing as "Oh, you are too lazy for Paris," which I slightly defended, living as I do in the South. At some point, Christophe demanded that I let my hair down as he wanted to take some photos and then minutes later I got up mid-discussion, without thinking, to help the struggling pair roll up a large Asian carpet from the parquet floors. Into the middle I stepped, my hair hanging over my eyes and we tightened our grips with each advancing step until it too was ready to be taken away. We joked as they lifted it over their backs and swerved between the customers in the hallways.

There is something about Paris when you somehow arrive inside the real of it...there is no explaining the non-mysterious mystery of how it seems to slide beyond time.

The olives eaten, Christophe positioned my suitcase à part and then sat on it to take a few more photos. He always does just what he likes, no matter where we are. Afterwards, as we gathered our belongings into the hallway to pay, Monsieur le Maître d'Hôtel arrived, rushing, with a bottle of each champagne raised in his hands. "No, you can not take the photos with empty glasses!" Chris seemed ready to protest. I readily settled back into our chairs. We savoured the "top off" and more photographs were dutifully taken. We had the entire room to ourselves.

Rémy popped back in. He and I chatted about his experiences overseas. I shared about now being an occasional professor of English and what a key speaking English is in the hospitality industry. That the whole world was open to him, not only that which is depicted in the famous murals of Le Train Bleu. As we finally readied to leave and Christophe paid (thank you, darling), Rémy offered to give me printed brochures in English and in French of the restaurant's history. "Oh! I can give one of my classes about the restaurant! That would be absolutely perfect!" I exclaimed (and ps. I will).

Rémy looked at me, paused and then asked, "Can you wait for a moment, please?" "Yes, of course," I replied, smiling, albeit a bit puzzled. We hadn't seen the time pass, Christophe and I. We rarely do. It was now nearing 9pm and the main dining room was full. We were back at the host stand, but Lucie was gone. I looked at the tables of so many well-meaning tourists, deep in their expectations, without a Parisian in sight. How different it all felt. I don't mean that disparagingly either. Different is just that, different. Paris is just that, Paris. We shifted weight from foot to foot, in our day clothes, as other champagne corks popped.

Some ten minutes passed and then Rémy's head suddenly surfaced at the far end of the room. He seemed to search for us questioningly, as if not sure that we would have waited. He looked slightly relieved that we were still there. I watched as he dodged and weaved through the waiters and clients to arrive towards us. He looked at me straight in the eye and put into my hands an elongated black box. "These will be clean," he said with a grin and then repeated it to make sure that I understood. "Ceux-si seront propres."

I can't remember now if I put my hand to his cheek, or kissed it, or both. My eyes were shining with joy. It is a moment that I hope to never forget. We said our goodbyes. Out Chris and I went, through the doors, to find ourselves on the balcony where our evening had begun. "What is it? He had said something about a book, is that what he gave you?" my lovely man asked. I said nothing. "We'll see at home," I offered.

And so we did, as we opened a (slightly less fancy bottle of Prosecco) to make a toast in our new, beautifully engraved glasses. "To us, à nous, to le sacré Train Bleu." 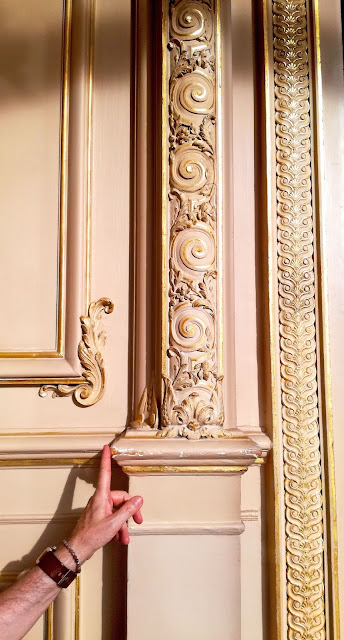